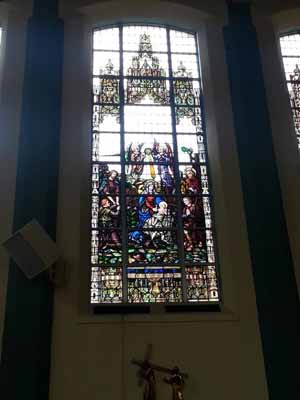 St. John has always held a very special place among Jesus’ Twelve Apostles, long before his authorship of the Gospel, the book of Revelation and the three epistles named after him.

John, who is so very often discussed in tandem with his older brother James, was a fisherman by trade, and the son of Zebedee and Salome. The two brothers often fished with their father in Lake Genesareth, and it is thought that the two brothers, along with Peter and Andrew, may have become disciples of John the Baptist before being called by Jesus for inclusion among His Apostles.

John was present at the scene of many special moments in the life and ministry of Jesus, such as the raising of Jairus’ daughter from death, the Transfiguration, and the Agony of Jesus in Gethsemani. In DaVinci’s famous portrait of “The Last Supper”, it is John who was seated next to Jesus, with his head resting on Jesus’ chest. At Calvary, it was John to whom Jesus entrusted the care of His Mother Mary, and it is John who is often referred to as “the disciple whom Jesus loved”.

After the Resurrection, it is John, along with Peter, who is the first Apostle to reach the tomb and proclaim faith in the Risen Jesus. It is also John who plays a pivotal role in aiding Peter to guide the infant Church, and it is John who faces imprisonment with Peter as well.

History is rather vague in chronicling the activities of John in the days after Jesus’ Ascension. It is quite possible that John proclaimed the Gospel message in missionary journeys to Asia Minor before returning to Jerusalem to participate in the Apostolic Council there in A.D. 51. Early Christian writers such as St. Justin Martyr, Eusebius and St. Irenaeus write that John lived in Ephesus (in present-day Turkey), where he both directed the Church and wrote his Gospel. He was banished to the island of Patmos during the reign of the Roman Emperor Domitian, but returned to Ephesus during the subsequent reign of Trajan. Tradition holds that it was on Patmos that John was gifted with the visions described in the Book of Revelation.

Theologically, John’s Gospel is quite different from the previously written Gospels of Mark, Matthew and Luke. Written between A.D. 90-100, it reflects what is known as a “descending Christology” – an understanding of Jesus that emphasizes His divine origin and His pre-existence as the Word of God, or “Logos”. That is why Christian art uses the symbol of an eagle to represent John and the uniqueness of his canonical writings. The three epistles ascribed to John were written after his Gospel and address wrongful teachings that began to creep into the early Church, such as the heresy of Docetism, which maintained that Jesus only “seemed” to be a man.

The Book of Revelation  stands out as perhaps the most confusing text in the New Testament,  embracing a style of composition known as “apocalyptic writing”, in which various visions are given to the author by a heavenly emissary, and rich symbolism and imagery are used to emphasize God’s ultimate control over history and the eventual coming of a “Golden Age” of peace and justice at the hand of God. Christian scholars have grappled with the meaning of these symbols, visions and images for the greater part of the last 2000 years!

As with the writings of Matthew, Mark and Luke, the question is always asked as to the identity of the real author of John’s writings. It is believed that the words of each of these evangelists were written not by the Apostles themselves but by their subsequent disciples, who compiled their masters’ accounts and recorded them for posterity. But whether John himself “penned” his Gospel, epistles and Revelation or they were organized and scribed by a disciple, the Church views these writings as worthy inclusions in the canon of the New Testament as chronicles of an Apostles who was as close to Our Savior as any other person.

One final note: the Church celebrates the feast day of St. John the Evangelist on December 27th.